It was back in the years 1973-74 when Nardo Bonini began to think of a system to be installed on windows to protect children from mosquitoes. He encountered by chance a friend returning from Australia and something clicked in his head; he told him about a product he saw there that could be introduced in the Italian market too. It was a “bug screen” to protect people against insects. He had a sample with him: a small aluminum panel with a net. Thus the idea of creating a “bug screen” was born.

Since then Nardo started thinking about how to improve this product; after a while, the first prototype of a real insect screen, made up of two fixed panels, took shape; it worked like a sash window, with one single panel moving upwards.

From that moment on, Nardo, who worked as a gearmaker and maintainer in a company nearby, devoted himself body and soul to develop this idea after his standard shift.

The product seemed to work, so his garage soon became a small manufacturing workshop.

Nardo met someone willing to join the company as a financing partner.

This is how the F.I.A.M. Company was born. F.I.A.M. stood for Fabbrica Italia Automobili a Motore: despite it had no logical connection with the product sold, the name was kept as the trademark was already registered.

During autumn of 1976 his first insect screen was launched, later known as System B (Bonini system). It was the first "moving" insect screen.

Made by two vertical profiles plus two horizontal ones to be used as handle bar and cartridge header, it had a retracting net that opened half the height of the product.

It was the first product patented by Nardo. 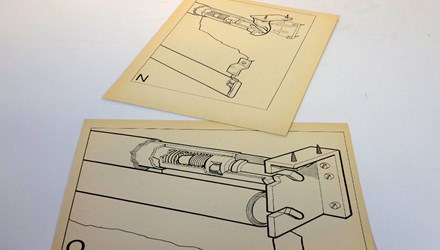 The following year (1977) began with the best expectations both for production and sales. In April / May the sales of insect screens started increasing, and , provided the growing demand, Nardo hired a worker in July of the same year.

In April 1978 Nardo was aware that with his business volume he could well afford the salary of a full-time worker, so he decided to take the risk: he leaved the company where he worked and undertook a full-time work within his company.

In the meantime, requests to build new and different insect screens arrived: caravan dealers wanted to introduce darkening and light filtering systems to guarantee added value to their products.

It was a new challenge: the market demanded no longer a fixed or semi-fixed panel placed in front of the window, but a roller blind that could be kept fully OPEN OR CLOSED according to customer's needs.

1979 was the year when the production of a spring-guided retractable system started. Nardo began the engineering of the first prototypes in collaboration with Italian manufacturers of dormer windows. 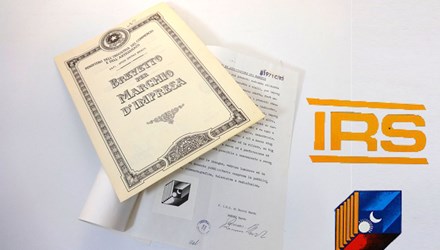 In 1981 the F.I.A.M. was dissolved. The work was there and kept on increasing, however the two partners’ visions were at the antipodes. To Nardo, there was only one solution: creating his own Company. Industria Reggiana Schermature was born. The company found a new facility inside a small industrial warehouse. The manufacturing area availability increased and so did the employees, now up to 3 units.

The business kept growing and the shed next door was purchased, bringing the surface to 1,200 m2. The Industrie Reggiane Schermature trademark was registered as per historical record. 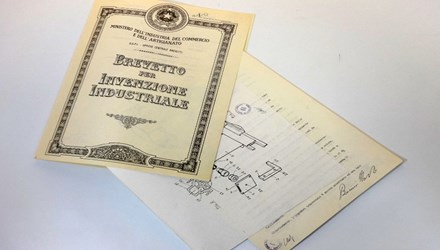 During 1982/83 Nardo understood he had to work 12 months a year and add new products to the range if he wanted to satisy the market requests.

This was when the INSECT SCREEN KIT was born.

produce an insect screen that can be reduced by modules of 8 inches by 8 inches with a height of 67 inches in different colors and that can be brought to size by an installer. None of this had ever been seen before.

This new semi-finished product allowed Nardo to produce items long before they would be sold, making the best use of the staff employed, in a period that would otherwise be without orders. He invested in increasing the Kits stock, to be sold during the season. In spring and summer, he would have focused on the production of customized insect screens.

This revolutionary idea met the favor of the market which grew very, very quickly; the company thus began to concentrate more and more in this sector. 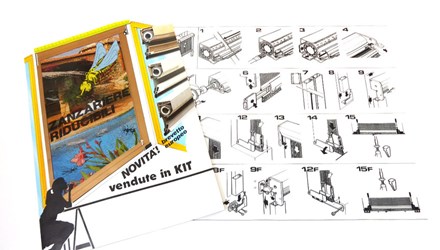 In 1984, Nardo began a new venture: the production of an horizontally retractble insect screen for doors. The challenge was won and the product worked. In 1985 the company moved to the new premises in Via D'Azeglio also in Novellara.

In 1989 the manufacturing area was brought to 4,000 m2 thanks to the construction of a second warehouse in via d'Azeglio.

In 1993 a new, simpler and more modern company logo was introduced. 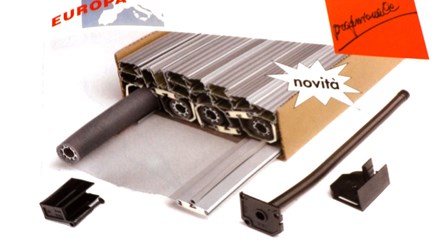 In 1995 a new insect screen was launched: it had profiles obtained by profiling pre-painted tapes and polyurethane injected inside. It was the first time such system was applied to insect screens. The product achieved great success on the foreign market, attentive and sensitive to innovation. The model was called EUROPA.

In 1998 Industria Reggiana Schermature moved to the new headqaurters in Via Vettigano in Campagnola Emilia. An export manager and a sales manager for the Italian market were recruited to help Nardo in his business.

In 2001, a new retractable insect screen system was launched, which box had a 1,38 inches footprint. It has a pressure fixing system that allowed to install it without using screws.

In the following years the company had a strong expansion on the European markets bringing the production to 200,000 units per year.

In year 2010 the founder Nardo Bonini passed away. The Company is now at its second generation and Nardo's sons, Simone and Emiliano, are currently running the business. 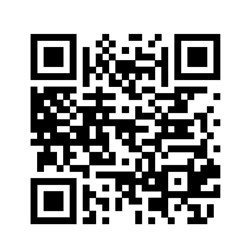 In year 2013 the use of QRCODE connected to video tutorials for DIY assembly of insect screens was introduced. In 2013 Retractablebugscreen TM started providing the retractable window and door screens manufactured by Industria Reggiana Schermature to the US market.

In 2016, the first insect screen kit with antibacterial and self-cleaning net came out. Industria Reggiana Schermature pioneered this particular type of mesh surface treatment in the world. The line was called SUNOX from the name of the patented treatment.

In 2021 the brand new RetractableBugScreenTM website is launched. A complete range of products is now availble for the US market for instant sales of DIY kit products.

RetractableBugScreenTM is the Leader in the Retractable mosquito screen industry. The RETRACTABLE insect screen for Windows and Doors is a product our company PIONEERED. Our expertise and our over 40 years of experience adjusting to consumer needs and product issues in the Retractable Mosquito Screen sector has allowed us to hone our product to produce the most innovative and best made RETRACTABLE mosquito screen in the market. Our company is a leader in its niche industry and is here to stay. Providing you with the latest innovations, ideas, advice, information and solutions for protecting yourself from insects in all environments. Today, we can state with quiet confidence - and great satisfaction - that consumers across Europe REQUEST our product. Most D-I-Y or hardware stores in Europe carry at least one of our insect screen product lines.